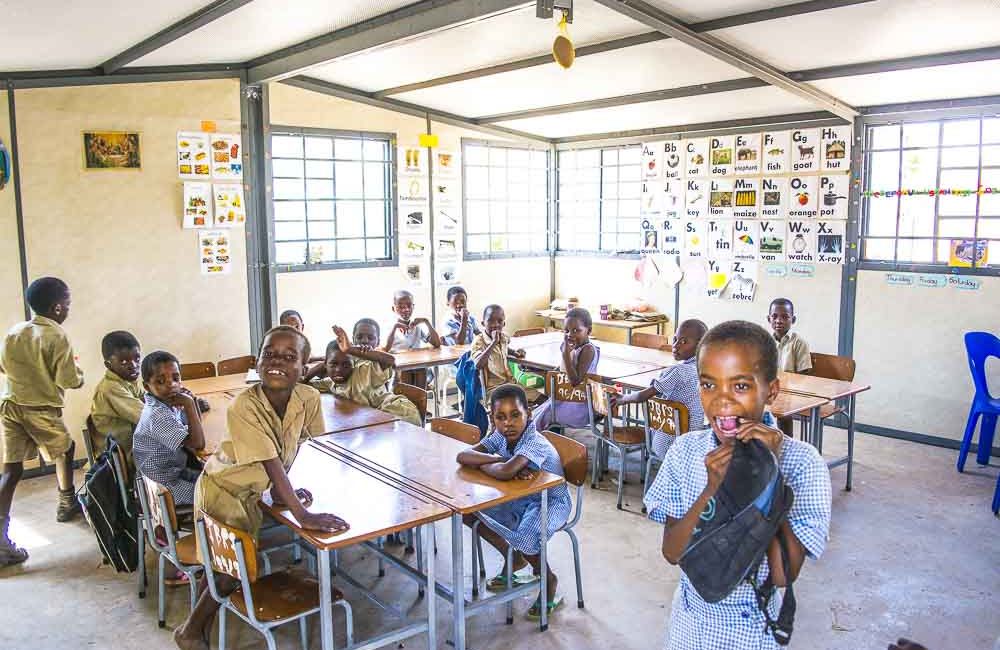 Opposite the Victoria Falls airport lies a track which seems of little consequence. There is no signage and looks like it could lead into the middle of nowhere, in face there is little to suggest that what lies beyond the scant foliage is a small school, run by a woman who is in the same mould as the venerable Mrs Hammond who set up Plumtree school at a railway siding in the middle of nowhere in disused railway carriages in the 1800’s.

Jabulani school has both a senior and junior school, it is small for a rural school and this is probably the reason for its relative success.  The high school consists of a dusty courtyard, where the Zimbabwe flag flies, and one building which is divided into two classrooms. There is no hot seating at Jabulani, a common occurrence at other Government run institutions and this is the reason the school has been kept to this size.  However there are still up to 50 pupils per class and it seems that all forms are taught together. This was the impression I was given when all of the students came out of the classroom to greet us.

We were then treated to a fantastic display of singing and dancing under a tree (it was a hot day and the shade provided a welcome relief for us all).

The students started off with a rendition of their welcome song which can be found on the Nakavango Facebook site and proceeded to perform at least five more numbers which included dance as well.

All of the young men and women were dressed impeccably, some had school shoes and some didn’t  but for those that didn’t they were just as smart and well turned out.

The smiles resonated and the ladies cheered for the young men who were dancing, there was much raucous laughter at some of the moves – which were clearly well rehearsed adding to the impromptu festivities.

Moving onto the primary school we were introduced to Sue Goatley of ‘Children in the Wilderness’ and were given the tour by Sephiwe – the headmistress. There is a dire need for money here.  The council charges outrageous amounts for water usage and it is an average reading so is way above what the school actually uses. Many parents cannot pay for the five US dollars term fees and so pay the tuition in the from of community service.

The fist priority is a borehole and plans are already in motion and more classrooms will follow after this.

Currently some children are in the two buildings while other lessons are conducted in the open air in the shade of fantastically large trees.

One aspect which struck me was that there was a hive of activity everywhere I looked.  From thatching to cooking, keeping the grounds neat and tidy and teaching.

We look forward to having a lot more involvement with Jabulai school and stand in awe of their teaching staff who have started an athletics team and have plans afoot to start some club activities such as chess and scrabble. An inspiration to us all that a little bit of commitment and passion can go a long way.