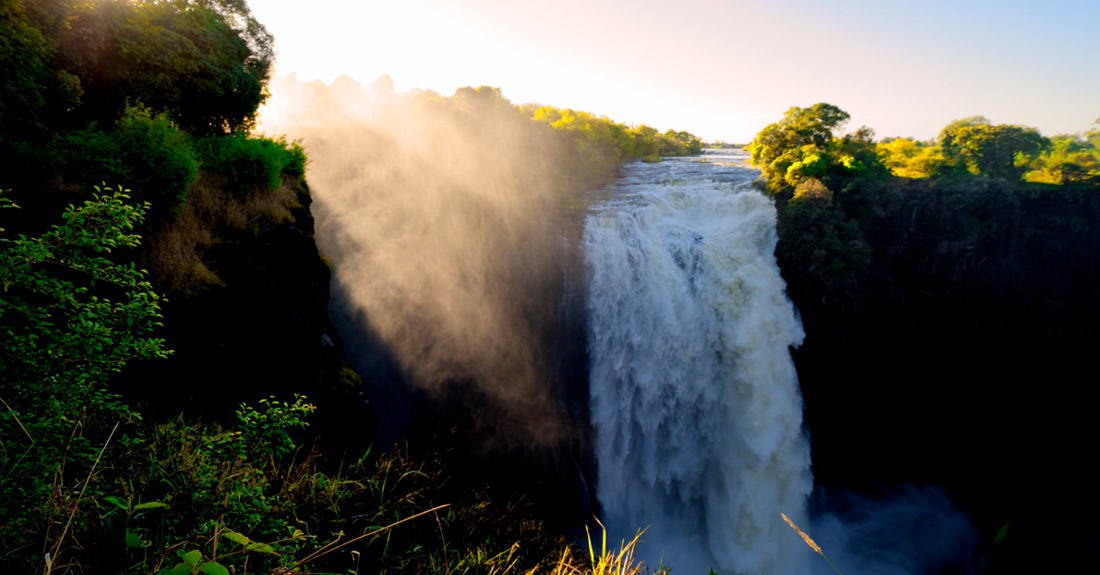 Volunteer Scott Dicken gives us his unique perspectives on our programme: Waking up at an ungodly 5.30am has become our daily ritual to allow time for me (and more importantly, my wife) to down two cups of instant coffee before heading out.

By 6.30am pickaxes, shovels and hoes are hastily collected from the storeroom and thrown into the game drive vehicles ready for the drive out to a local school adjacent to the reserve to give back to the community.

While most mornings consist of work on the reserve, which could include anything from game transects to tracking black rhino and African elephant on foot, to road maintenance and invasive plant species removal, once a week Nakavango volunteers head out to Masuwe Primary School.

The drive to the school takes us through the heart of the rust-red Kalahari sands of the reserve and alongside the neighbouring Zambezi National Park, providing ample wildlife-spotting opportunities along the way. This morning we are particularly lucky. Alongside the regular sightings of impala, zebra, baboon and giraffe, we spot a distant hyena furtively roaming the grasslands and a kettle of vultures circling overhead – a clear indication that there’s been a recent kill very nearby (and something we’ll return to later).

‘Fun’ Fact: Unlike most species the name for a collective group of vultures changes depending on their activity. When in flight formation they are known as a kettle. Generally, they are known as a flock, venue, committee or volt. Somewhat more morbidly they are also known as a wake when they’re found together feeding on a carcass. Charming!

Today’s work at the school is focused on the development of a vegetable garden; and in particular, hoeing straight rows ready for planting and laying irrigation equipment. It’s hot and unforgiving work – as the sun rose higher, the blisters on our hands increased and our straight planting rows became rather crooked.

Yet, there’s something incredibly satisfying about moulding uncultivated soil into compliance with nothing more than a shovel and a pickaxe. But more importantly, having spoken to the school’s teachers, the garden is clearly needed to help sustain the teaching staff whose pay is often late – if it arrives at all.

It’s my hope that our sweat-inducing toil will go some way in helping to shape the future leaders of Zimbabwe; although having been unable to reclaim my camera from the vice-like grip of a feverish 8 year old for the last ten minutes it seems like we may instead be inadvertently cultivating a few future Ansel Adams and Annie Leibovitz!

In the searing mid-day heat, between work shifts, Nakavango volunteers have the chance to rest, recuperate, socialise or head downtown to Victoria Falls. For those wishing to stay close to home, the invitingly refreshing pool at HQ is an obvious bonus; and a spot from which you’ll likely see giraffe, buffalo or elephant meandering past.

Stay poolside towards late afternoon, and you’re sure to be joined by the resident flock of eccentric guinea fowl or a flash mob of 40-odd mongoose. Alternatively, one could choose to watch the wildlife converge around the expansive waterhole whilst supping on an ice-cold milkshake at the 5-star Stanley & Livingstone Boutique right next door.

But today, as our trip draws to a close, and after surreptitiously scarfing down a second hamburger at HQ for lunch (the cooks at HQ are magical), a group of us choose to brave the curio market in downtown Victoria Falls, a mere 10 minute drive away.

Set only a couple of minutes away from the country’s most famous attraction, Victoria Falls (otherwise known as ‘the smoke that thunders’) the curio market is a shopping and bartering paradise. For the uninitiated, the somewhat unconventional sales techniques prevalent in African craft markets require a rapid learning curve.

After an hour of light-hearted but intense bartering with artisans, we come away with more souvenirs than we can possibly fit into our backpacks. Thankfully, the loss of some of our clothing will help offset that fact. Back at Nakavango, and come 4 pm, it’s time to head out on our evening activity. As with morning activities, afternoon activities vary throughout the week; and it’s not all hard work. From enjoying a few beers out on the reserve as the sun goes down to overnight camping in the wilderness as the sounds of wildlife surround your tent, the programme offers something for everyone.

This afternoon we’re focused on the removal of alien vegetation (of the non-indigenous rather than inter-planetary variety). Today’s enemy #1 is Lantana. Alien vegetation on the reserve has a nasty habit of rapidly taking over; threatening indigenous plant species and unsettling the ecosystem to the detriment of the reserve’s wildlife. It is, therefore, a vital aspect of reserve conservation.

Although it might not be one of the most glamourous of activities, it’s one of the most satisfying; particularly as you’re able to view your own machete-wielding path of vegetative destruction after a couple of hours of hacking away to the sounds of 80’s power ballads blasting from the portable speaker.

Having made light work of the Lantana we refocus our attention on the suspected kill site we stumbled across this morning. As the sun begins to set we’re all excited about the prospect of returning to see what scavengers might have descended on the carcass to feed. We head back to HQ, quickly pack up the cooler with a few sundowners (i.e. beer, wine, etc.), and pile back into the safari vehicles.

We aren’t disappointed! As we arrive at the kill site and pull closer to what’s clearly a buffalo carcass we see a rustle in the thick bushes. Out emerges a leopard; notoriously difficult to spot on a game drive, and the first we’ve seen in the two weeks we’ve been here. It’s a fleeting glimpse, sufficiently fleeting that I didn’t have a chance to grab my camera, but a glimpse nonetheless. It’s a good start, but now we’re eager for more.

We position our two safari vehicles either side of the carcass, and partially hidden by the thicket, dim the lights, and wait in silence. Around thirty minutes pass and then we see frantic waving and wild gesticulating from the other vehicle of Nakavango volunteers. Following their gaze around 100m away from the carcass, and towards the fence-line of the reserve, we see it.
Behind me, I hear someone exclaim, “A rhino!”

As we’re all fumbling with binoculars, camera gear and angling for a better view, a volunteer to my left whispers under her breath, “Wait… what’s that coming up behind the rhino?”

After ten minutes of feverish excitement and heightened expectations, the site goes peacefully quiet again. The sun has now well and truly set and the temperature drops rapidly. Hearing a rustle in the bushes close to the carcass, Dean – our fearless, commonly shirtless, and animal-faeces-obsessed Nakavango pro guide – aims a spotlight towards the sound. Eyes glint through the darkness back towards us. It’s a hyena.

We watch eagerly, the clicking of camera shutters is the only sound cutting through the silence as the first one and then two more hyena take turns feasting on the carcass less than 10 meters from where we’re sitting. The hushed silence amongst the group highlights what a unique wildlife moment this is.

After a hard day’s work

After a hard day’s work on the reserve, there’s nothing better than to head back to HQ, have a well-earned shower, and enjoy a meal prepared by the amazing Nakavango kitchen crew. We’ve sampled everything from burgers and pizza to steak and sadza (a white maize staple in Zimbabwe) over the course of our two weeks on the programme.

Although we have the option of heading into town for the evening and seeing as this is our penultimate night at Nakavango, we opt to stay at HQ and gather around the sunken fire pit to toast to a successful 2 weeks, make some s’mores and watch the stars…. Or at least that was the idea until, after a few glasses of wine, our resident Latin contingent offered impromptu salsa lessons that continued until 1 am.

I can’t think of a better way to end our time here!

Words and images by: Scott Dicken