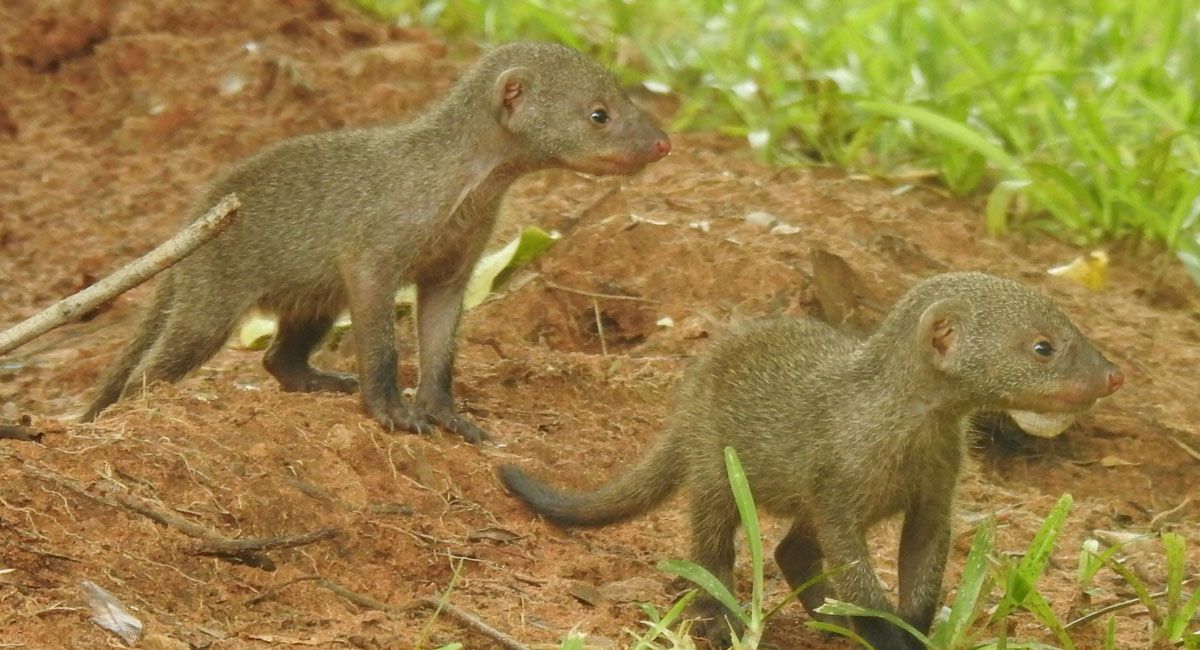 Justine McGregor, our Operations Manager, shares a heartwarming story about one of Nakavango’s smaller residents:

One Friday afternoon, our resident pack of mongoose arrived in our garden, and for the first time this year, they brought along their babies – 20-30 ranging in ages, some much bigger than the others. It was a lovely surprise and we were thrilled to see these adorable creatures.

The following morning, the guard by the Nakavango gate heard a baby in distress and brought it to me. I have honestly never heard a story about a wild animal living successfully with humans. They ultimately end in tragedy, with the animal having to be re-homed. However, when presented with this tiny, vulnerable creature, I couldn’t help but take him in.

We decided to see if the pack would come back for the baby, so we could try and give it back to them. We tried not to touch Monty and just kept him warm and fed with cat milk powder and Cerelac. He was constantly calling, making the sweetest sounds in the hopes that his pack would find him. But they were out of earshot and could not hear him – it was heart-breaking knowing that he was looking for his family. By the next day, it was impossible to try and limit human touch, as he kept climbing up and out of his blanket and into our hair, and all over a few of the volunteers and I. We all took turns looking after and feeding the baby. They are very social animals who live in large groups, so this was natural for him and he was calm, content and happy just to be close enough to feel our heartbeats, and obviously well fed.

On Sunday, Monty was putting on weight, we were all in love with him, and he was starting to play. We introduced him to other volunteers so that he would feel comfortable with whoever was on babysitting duty. I had the night shift on Sunday, which was no easy feat as I also have a natural predator of baby mongoose (Pearl our family cat). Needless to say, I didn’t get much sleep on the couch with Monty on my chest. I kept waking up every five minutes to make sure Pearl had not decided to eat the loud little rat-like creature in her home. By Monday, Monty was a part of the Nakavango family. The new intake of volunteers had arrived, and everyone was in love with Monty. I was quite sure that by this stage, his family would never accept him back due to the smell of humans on him.

On Tuesday the front pack came through my garden, mostly males and a few females with older pups. We agreed that Monty’s mum was not there as he was so much smaller than the pups. About 20 minutes later the nursery group came through – about 5 mums and 20 – 30 babies, some the same size as Monty. I made an instant decision.

I took him to my lounge door, and he heard them. He made a few noises and they heard him and came straight to the door. I made the heart-breaking decision to take him outside. These mongoose know me, so I sat down and three mums came up to me. I put Monty on the grass and the oldest mum came straight up to me and grabbed him. My heart was in my stomach as I was so scared that they were just going to pull him apart.

He escaped her and ran straight back under my legs. I was scared but I just knew that we had to try this again, so I put him back on the grass. She grabbed him again by the leg and then moved about a metre off. All 5 mums smelled him, and for a second picked him up and ran a short distance into the bush and off the lawn. We watched with huge lumps in our throats as they then ran off again with Monty. My heart was confused, happy and broken all at the same time. The group stayed in the bushes close to my house for a few hours and then the rain came down. All I could think was that I hoped he was safe and warm. I then found the group next to my veranda in a hole dug in the sand, and all the pups under the mothers. This past Wednesday I was about to leave home for work when I heard the group outside. This is unusual as we normally only see them once every few days, so I went out and sat on the floor and enjoyed watching them. A few of the mums came closer to me.

I will never know if what happened next was Monty or not, but one of the mums nudged a baby closer to me. Not close enough to touch, but it really felt like she was saying “don’t worry we have him now.”